The physicians, nurses and healthcare professionals at the Baptist Health Breast Centers realize that breast health and breast cancer treatment are increasingly important issues in women’s lives. Because breast cancer affects one in eight women in the U.S., Baptist Health has developed a strong, comprehensive program of services for breast health and the diagnosis and treatment of breast disease.

What is Breast Cancer?

The body is made up of various kinds of cells, which normally divide in an orderly way to produce more cells only when they are needed. Cancer occurs when cells become abnormal and divide without control or order.

There are several types of breast cancer, including:

When breast cancer metastasizes, or spreads outside the breast, cancer cells are often found in the lymph nodes under the arm. If the cancer has reached these nodes, it may mean that cancer cells have spread to other parts of the body.

We seek to make the breast cancer treatment process less confusing and frightening by providing a Nurse Navigator to assist patients from beginning to end. The Nurse Navigator not only helps coordinate care between various physicians and procedures, but also provides encouragement along the way, helping connect you to other women with breast cancer through support groups.

Our breast centers are designed with your convenience and comfort in mind. We have four easily accessible locations in Little Rock, North Little Rock, Fort Smith and Benton. The Little Rock location is open extended hours on weekdays to accommodate today’s busy schedules.

There are two types of breast conservation (tissue-sparing) surgery: 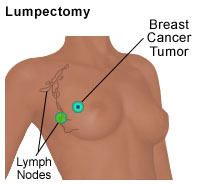 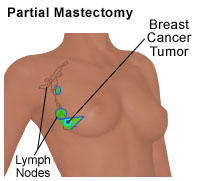 Partial (Segmental) Mastectomy involves the removal of the breast cancer and a larger portion of the normal breast tissue around the breast cancer (the areas removed during the surgery are shaded in green).
With both procedures, the surgeon may not only remove the breast cancer, but also some of the lymph nodes under the arm to determine if the cancer has spread. The bean-shaped lymph nodes under the arm (also called the axillary lymph nodes) drain the lymphatic vessels from the upper arms, the majority of the breast, the neck and the underarm regions. Often, breast cancer spreads to these lymph nodes, enters the lymphatic system and spreads to other parts of the body. Radiation therapy may also be given after either surgery, to destroy cancer cells that may not have been removed during the procedure.

Your doctor may recommend a mastectomy (breast removal) as the best surgical option under the following circumstances: if the cancer has spread to other parts of the breast tissue or to the lymph nodes under the arm; if you have already had radiation therapy to the affected breast; if there are two or more areas of cancer in the same breast that are too far apart to be removed through one surgical incision and allow a satisfactory appearance; if the breast is very small and a lumpectomy would require removing additional breast tissue, resulting in a very deformed breast.
There are three types of mastectomy: 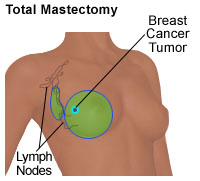 Total (or Simple) Mastectomy involves removal of the entire breast (including the nipple, the areola and most of the overlying skin) and may also remove some of the lymph nodes under the arm (the areas removed during the surgery are shaded in green). The bean-shaped lymph nodes under the arm drain the lymphatic vessels from the upper arms, the majority of the breast, the neck, and the underarm regions. Often, breast cancer spreads to these lymph nodes, enters the lymphatic system and spreads to other parts of the body. A skin-sparing mastectomy removes the same amount of breast tissue but leaves most of the skin, except for the nipple and areola. This may be an option if immediate breast reconstruction will be done. 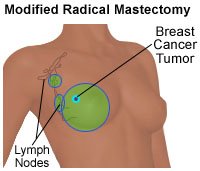 Modified Radical Mastectomy involves removal of the entire breast (including the nipple, the areola and the overlying skin), some of the lymph nodes under the arm and the lining over the chest muscles. In some cases, part of the chest wall muscles is also removed (the areas removed during the surgery are shaded in green). 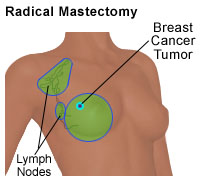 Radical Mastectomy involves removal of the entire breast (including the nipple, the areola and the overlying skin), the lymph nodes under the arm and the chest muscles (the areas removed during the surgery are shaded in green). For many years, this was the standard operation. However, today, a radical mastectomy is rarely performed and is generally only recommended when the breast cancer has spread to the chest muscles.

Radiation therapy is a process that precisely sends high levels of radiation directly to the cancer cells. Radiation done after surgery can kill cancer cells that may not be seen during surgery.
There are various ways to deliver radiation therapy. However, external radiation is the usual type that is used for treatment of breast cancer. These are the ways radiation can be given:
A radiation oncologist will plan your radiation treatment based on your medical history, a physical examination, pathology and laboratory reports, and previous mammograms and surgeries. Your chest area will be marked with ink that must stay on your skin for the course of your treatments. These markings assure that the radiation will be given to the exact area requiring treatment.
Radiation treatment is like having a standard X-ray, but the radiation is stronger. This breast cancer treatment lasts only a few minutes and is painless. A typical course of radiation treatment of this type is treatment for five days per week over a six week period. If chemotherapy is also to be given, radiation treatment may not be given until after chemotherapy has been completed.

Chemotherapy is the use of anticancer drugs to treat cancer. It reaches all parts of the body, not just the cancer cells. Chemotherapy can be given intravenously (in the vein or IV) or by pill and usually a combination of drugs is used. Breast cancer treatments are often given in cycles: a treatment for a period of time, followed by a recovery period, then another treatment. Chemotherapy can be given before surgery to shrink the tumor and sometimes make breast-conserving surgery possible rather than a mastectomy. Many times it is given after surgery and may be given every three weeks or every two weeks in a “dose dense” fashion.

If you have a strong family history of breast and ovarian cancer, or have women in your family that have been diagnosed with breast cancer before the age of 50, your family may be at risk of having the Hereditary Breast and Ovarian Cancer Syndrome (HBOC). If you are worried about being at risk for breast cancer, take a breast cancer rick assessment here. At the Baptist Health Breast Center, we give all of our patients a questionnaire to complete in order to screen for this syndrome. Both sides of the family are equally important.  If a woman meets the National Comprehensive Cancer Network criteria, we offer genetic testing to discern whether she has a mutation in the BRCA 1 or BRCA 2 gene.  A positive test would predispose her to a high lifetime risk of breast and ovarian cancer or a higher than average risk of a 2nd breast cancer if she has already been diagnosed.  This is important information to know because it can impact your future healthcare plan. There are options for closer surveillance, chemoprevention, or surgery.  There is no right or wrong choice. It is a personal one.

Breast ultrasound (or sonography) is an imaging technique for diagnosing breast disease, such as cancer. It uses harmless, high frequency sound waves to form an image (sonogram). The sound waves pass through the breast and bounce back from various tissues, to form a picture of the internal structures. It is not invasive and involves no radiation.
A breast ultrasound may be used for the following:

Ultrasound core biopsy is a type of needle biopsy used to evaluate solid abnormalities seen on ultrasound. It is a less invasive alternative to surgical biopsy and is performed on an outpatient basis.

If a surgeon cannot feel the abnormality that needs to be removed, needle localization may be performed prior to surgery. Needle localization involves placing a small needle into the breast in the area of abnormality. This procedure may be performed either under ultrasound guidance or mammographic guidance, depending on which type of image best shows the abnormality. After the radiologist is certain that the needle is in exactly the right position, a thin wire is placed through the needle and the needle is removed. All that is left in the breast is a thin wire marking the area of abnormality.
Mammographic pictures are then taken and sent with the patient to the operating room. There is usually only slight discomfort, if any, during this procedure.

FORT SMITH, Ark. – Baptist Heath-Fort Smith has relocated its COVID-19 testing site for people concerned about possible exposure to COVID-19 or who are experiencing symptoms such as shortness

SALLISAW, Okla. – Mark Fowler, MD, an obstetrician and gynecologist with Baptist Health Women’s Clinic-Fort Smith is now seeing patients at a satellite clinic in Sallisaw, Oklahoma. The clinic is

CONWAY, Ark. – Tim Bowen, president of Baptist Health-Conway, recently joined the 2020 class of 40 Under 40 honorees named by Arkansas Business. “It’s such an honor to be